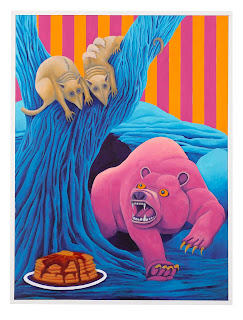 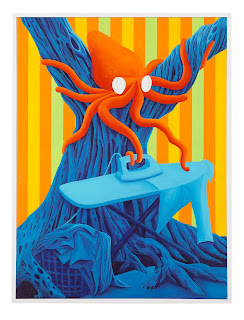 
Bill Ross is a social-worker and artist who lives in Cincinnati, Ohio. In 1999, while supporting people with developmental disabilities in the area, he began to come across artists with disabilities creating incredible works. Raymond Thunder-Sky was the first artist he worked with, and this initial meeting led to Ross and Keith Banner co-founding Visionaries & Voices, a studio for artists with disabilities, in 2003. In 2009, he and Banner developed Thunder-Sky, Inc., a non-profit arts organization and gallery dedicated to archiving the works and maintaining the legacy of Raymond Thunder-Sky, as well as offering a chance to exhibit to unconventional artists in the area.


Paradise surveys works from the last decade. Ross’s paintings in “Paradise” depict a candy-colored universe that is both seductively sweet and jarringly violent. In each of his works, Ross uses storybook visual cues (cute but demented animals and creatures populating a Day-Glo forest with cupcake-covered hills beneath an orange-pop sky) to undermine the phoniness of fairy-tales, while somehow maintaining the innocence and humor. In 2004, Ross began a series of collaborations with a variety of artists labeled with developmental disabilities (many of whom attend V&V), including Dale Jackson, Becky Iker, Michael Weber, Kevin White and the late Donald Henry. These collaborative works (usually paintings) are about dislocating notions of who is an artist and what art can be and do, and feature Ross’s signature phosphorescent style merged with the signature styles and obsessions of each of the collaborators.


The exhibition runs through August 21st, including a reception with the artist Final Friday, July 30th from 6-11 pm.