Zep Up with Michael Stillion! 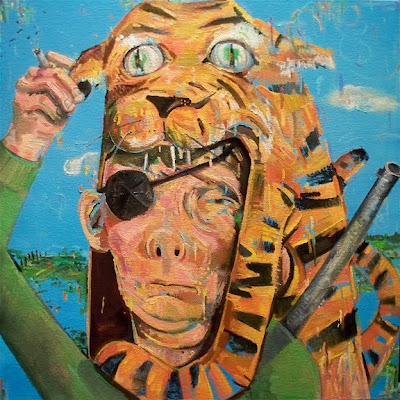 Opening Final Friday October 29th, a reception with the artist 6-11 pm is: Zep Up: New Work by Michael Stillion.

In Zep Up Michael Stillion brings a new show of evolution, deconstruction, crude love, and creation to the fall season at 1305. This time 3 years ago Michael was installing his first show at the gallery: Man-Made. We begged him to come back after his recent residency in the Southwest and regional exhibitions! Stillions new work is delightfully disconcerting, fixed and wavering, lovely but disturbing, and all things that 1305 Gallery looks for in an artist's work.

Within his paintings and paper collages there is an immediate sense that objects hold no fixed place, that they are in a constant state of coming together and falling apart. Beyond that the subjects go straight from birth-to adulthood- to decomposition- and even to taxidermy, sometimes all in one piece. It's a surreality that Stillion's delightful application of paint permits the viewer to enter at will.

There is a balance in the paintings between his loose, free, and expressive use of the media and the tighly rendered and controlled objects that struggle to make up some undefinable yet wholly present construct. They are playful and inviting, while encasing an ever present sense of gravity, humanity, animal scent, and magic. Many of these elements are new to Michael's paintings since his last show here, demonstrating how prolific painting and experience have molded his work since 2007.

Stillion's work transports you to an invented but remembered place, something both otherworldly and extremely familiar. You want to touch them but you're also afraid you might get too close. Come see.